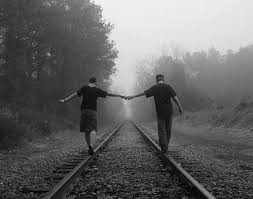 “Life is a tragedy when seen in close-up, but a comedy in long-shot.” -Charlie  Chaplin.

Through my recovery I’ve discovered an invisible divide.  Even when  surrounded by people in the general public, I felt as if I was on the other side of a chasm. Because while I could physically reach out and touch another person, they were still miles away.  I could voice what I was going through, but nothing quite explains it like shared experience does.  Fortunately, that chasm  feels like it’s getting more narrow. I’ve   even found myself happy when a friend came to me with  something  scary or possibly tragic that had happened. While I certainly don’t wish for anything bad to befall them, I found myself becoming comfortable in the space of rehabilitation(mind,body,and soul) it was in these places where broken people came to be  “fixed,” that I was at ease. Am I broken? No, but perhaps  the world  would generally see it that way. It was in rooms   for rehabilitation, that I wished my friends could be there too. As if it were some type of inclusive club, I wanted them to join too.  If common interests bring two people into friendship, it’s a tragedy that can truly meld them together. I didn’t like being on the other side of an invisible wall watching the world  pass by me. A world that had  jobs,social lives,significant others,the ability to drive,independence,freedom,and went to bed every night without  having to wear braces or go to therapy, but generally their time was spent how they  wanted. I felt as though my life,time,and freedom of choice had been hijacked by  the  most evil of beings.  I   desired to bring a friend into my  “fishbowl,”not to  commiserate, but to relate.  Bonds are built and strengthened when you go through a tragedy with someone. It  beats you up initially, then it leaves you open. In the aftershock,you stumble around   and bump into other confused  victims.  In meeting them you can  understand and  relate to the bandages that both of you now need.  I don’t consider myself a victim,but rather a survivor,and  what do survivors do? They  take the lessons  learned to rebuild, fight back, and become stronger. Because of  that initial beating I’ve had to  rebuild too and that’s exactly what I’m doing.

– Keep on your boxing gloves,